Autonomous ridepooling with software powered by ioki: autonomous shuttle-service in the Rhine-Main area to start in 2023

On 13 November at 7 p.m., the LahnStar launched in Limburg. With the innovative on-demand app of the RMV, the citizens of Limburg can travel from district to district in new small electric buses. Emission-free and electric, the LahnStar is an essential component of the Mobility Master Plan, which is gradually being implemented in Limburg. The Lahn-Star takes the successful dial-a-ride service (called AST in German) to a new digital level.

On the road between the districts

The LahnStar replaces the previous AST. It runs on order from 6.00 a.m. to 7.00 p.m. be-tween the city districts, as the regional bus routes there are always only oriented to-wards the city centre. Sunday to Thursday the LahnStar runs from 7.00 p.m. to 1.15 a.m. and Friday to Saturday from 7.00 p.m. to 3.15 a.m. in the entire city area. Additional stops in the city districts have been set up for this purpose to shorten the last mile between the station and the front door.

If the passenger is in possession of an RMV ticket, one ride costs 1.50 euros. Without an RMV ticket, the price is made up of price level 1 and a comfort supplement: 2.15 euros + 1.50 euros = 3.65 euros. Payment can be made conveniently digitally via the app or with a deposited account. Initially, four Mercedes eVito Tourer PRO vehicles will be on the road, all of which run on green electricity. From the end of November, a fifth vehicle will also start, which has been converted for passengers with reduced mobility.

And this is how it works

First, download the RMV On-Demand app from the Play Store or App Store. There, a mobile phone number and the desired payment method must be registered. To use it, the start and destination must be selected. You can choose between the options “order now” and “order later”. Alternatively, passengers can register for the LahnStar in Limburg once at the mobility centre and then order by telephone on the service number 06431-20 34 56. If required, a barrier-free vehicle can be ordered both online and by telephone. More information at www.lahnstar.de

With the launch of the LahnStar, the app developed by DB subsidiary ioki will be activated for the service in Limburg. The software makes the decisive difference to the previous AST, because it bundles the passenger requests and determines the optimal route based on the bookings. This saves valuable time and closes the gap between conventional public transport services and private transport. Limburg is one of ten on-demand partners in the RMV and thus belongs to the largest on-demand network in Germany. Limburg is also the first station in Germany where DB is using its own route guidance system for on-demand shuttles. The signs and signage direct passengers in the station to stops of the service and facilitate the transition from the train to the on-demand shuttle. 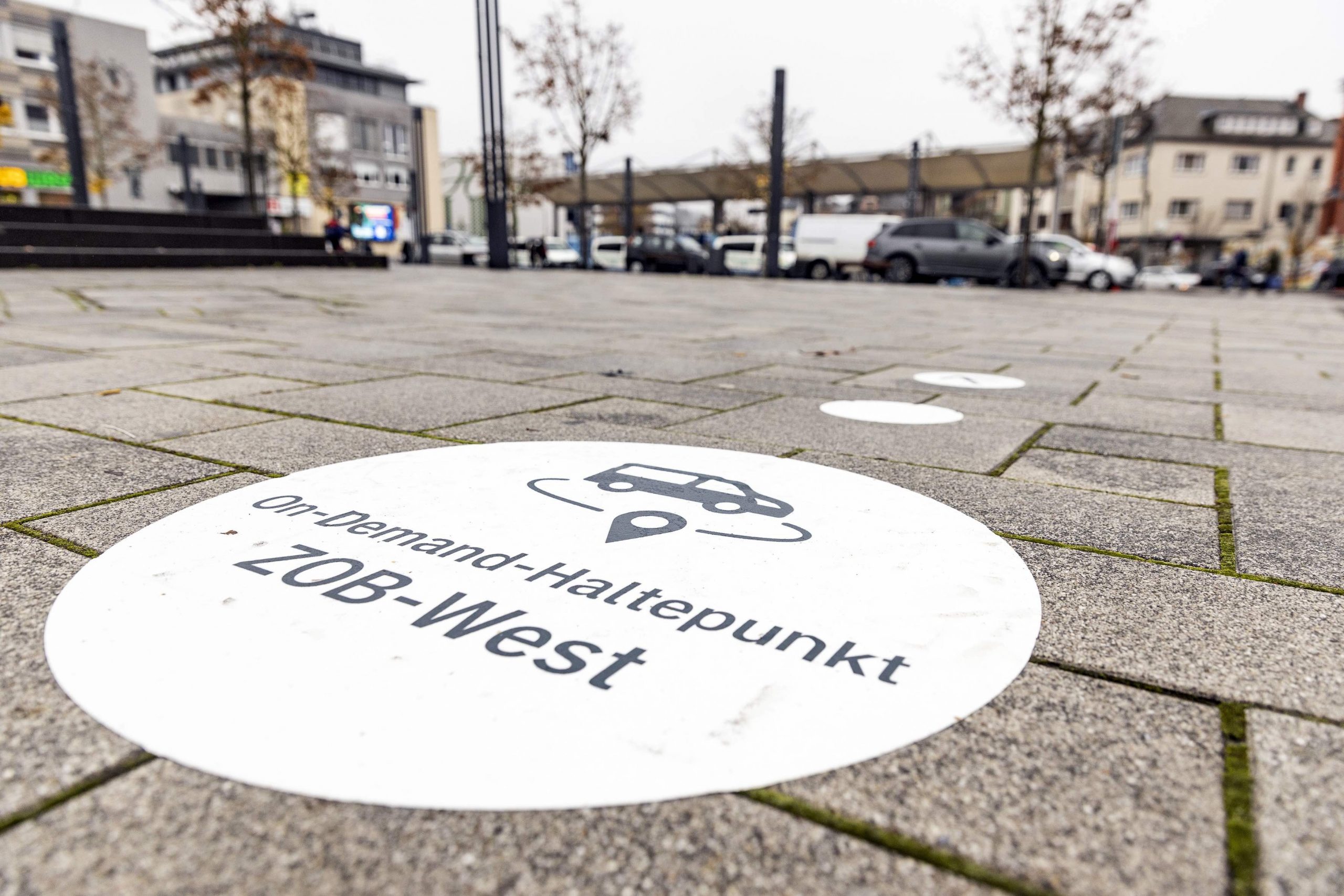 About the on-demand network

The “On-Demand FrankfurtRheinMain” project is the first on-demand project in Germany that spans several cities and districts and thus ten partners. Around 1.8 million people live in the catchment area of the shuttles. The goal of the project partners: to make pub-lic mobility even more flexible and convenient. The on-demand shuttles do not follow a fixed timetable but can simply be booked when they are needed. If several passengers want to travel in the same direction, the intelligent algorithm combines their travel re-quests as in a carpool. This results in more mobility with less traffic.

The Rhein-Main-Verkehrsverbund is coordinating the project. In addition to the city of Limburg a. d. Lahn and its city line, the local public transport organisations and transport companies of the municipalities of Frankfurt a. M. (traffiQ), Darmstadt (HEAG-mobilo), Kreis Offenbach (KVG Offenbach) and Taunusstein (RTV) offer on-demand services as part of the RMV on-demand network. Further project launches are planned by summer 2022 in Hofheim (MTV), Kelsterbach (LNVG GG), Darmstadt-Dieburg district (DADINA), Hanau (HSB), and Wiesbaden (ESWE Verkehr).

The local energy supplier EVL is the partner of the Limburg municipal transport system as the operator of the LahnStar. EVL will set up the charging infrastructure and provide the electricity free of charge. In addition, Taxi-Addi, an established and well-known transport company, has been contracted to operate the popular AST service for many years. Thus, as a partner in the large RMV On-Demand project, LahnStar links its local activities and goals with the larger movements in the Frankfurt Rhine-Main region.

This outstanding project is made possible by funding from the State of Hesse and the Federal Ministry of Transport. The Federal Ministry of Transport and Digital Infrastructure (BMVI) is funding the project with 27 million euros as part of the funding guideline “Digitalisation of municipal transport systems”. In accordance with the funding period, the project is scheduled to run until the end of 2024. However, a continuation of the project beyond this period is envisaged if there is sufficient demand and funding.

Voices on the launch of the LahnStar

Prof. Knut Ringat, Managing Director Rhein-Main-Verkehrsverbund: Nowhere in Germany is there a larger on-demand network than in the RMV area: regardless of whether the passenger boards an on-demand shuttle in Limburg, Darmstadt or Hanau – the same transport regulations, the same tariff system and all offers will be bookable via the same app. Especially for the last few metres to the front door, this service closes the gap in public transport and will bring us new passengers. I am pleased that Limburg is one of the pioneers of on-demand mobility and is thus continuing on its path of innovative ur-ban public transport!

Michael Stanke, City Councillor and operations manager of the city line: In Limburg, many destinations are also important outside the city centre: doctors, supermarkets and also for family visits or leisure time, people want to be mobile throughout Limburg. With the LahnStar, Limburg residents, customers and guests can now travel between the city districts on shorter routes and without changing trains. We are proud to be part of this largest on-demand network in the RMV with Limburg as a relatively small town and to be one of the pioneers.

Dr. Michael Barillère-Scholz, Managing Director of DB subsidiary ioki: With the new, digital on-demand service, we are shaping the climate-friendly, data-based future of public transport in Limburg. The LahnStar shuttles, which can be booked flexibly and conveniently via app, offer a simple and fast alternative for the first and last mile. The new guidance system in the station allows passengers to find their way directly from the train to the on-demand shuttle. The digital offer and the rail are thus optimally networked.

Dr. Marius Hahn, Mayor of Limburg: With the Mobility Master Plan, we have ambitious goals and want to encourage people to switch to buses and trains and also to use bicycles. This reduces emissions and, last but not least, helps to keep the air clean. We have a strong partner in EVL, which is also currently making a significant contribution to digitalisation in Limburg with the provision of WLAHN throughout the city.

Gerd Vieweg, Managing Director EVL: The cooperation of the numerous stakeholders in the city of Limburg is great. Joint projects in the course of eMobility and digitalisation are successful and lead to more sustainability in a very pragmatic way. The city’s businesses in the CityRing are also strong partners who will be multipliers for both the new WLAHN and the LahnStar.

50 years of the Limburg city line

In 1971, the city line transport was founded as the coordinator for local public transport services. With the incorporation of six additional towns, the number of inhabitants in Limburg almost doubled at the beginning of this period from 1970 to 1980. The construction of the Schiedetunnel, changes in traffic routing in the city and the constant increase in traffic density made new transport concepts necessary every ten years at the latest. With the founding of the RMV in 1995, there was better coordination with the regional rail services and the bus services of the district, so that all public transport services run successively at regular intervals. Stations, stops and buses have been renovated, the quality of bus transport has been improved and requirements for air pollution control and accessibility now determine the activities of the city line. The AST, which was introduced in 2015, will be replaced by the LahnStar. This will connect the city districts even better and more easily.

Do you need more information about ioki and our smart mobility solutions? We have exactly what you need, so just get in touch with us. Your contact: