4. Jun.
/ Germany
More green spaces for the city: Superblocks in Barcelona
The climate crisis has led to a shift in sustainable and innovative urban planning. Especially in large cities, where people fill the streets with life every day, it is important to offer citizens a space that strengthens and promotes a sense of community. Barcelona, the capital of Catalonia is like many other large cities also struggling with the consequences of urban life: full streets, noise and poor air quality.

According to a study, around 3500 people die each year in Barcelona and the surrounding areas as a result of air pollution. Cities must reduce their CO2 emissions and at the same time become more resistant to extreme climatic conditions. To actively address these challenges, the city has developed a plan to realise a “vision of urbanity” in the 21st century: Fewer cars and more spaces for pedestrians and cyclists. Many European cities are leading the way and reducing car traffic in their city centres. In the Norwegian capital, the government has completely closed the centre to cars, London is working on making half of the streets in the city centre permanently car-free, and even Madrid has announced that it will only allow residents’ vehicles to enter the city centre.

What are Superblocks actually?
In order to minimise the dominance of cars in the city and to strengthen the sense of community of the citizens, so-called superblocks (superilles) of four to nine neighbouring, car-free residential quarters were converted into a mixed-use area. In the process, most streets were changed into pedestrian-friendly public areas where citizens can move freely on the street. Every resident has access to the superblocks and can cross the city without needing a car, without the hassle of looking for parking spaces or standing in traffic jams for hours. Only residents and delivery vehicles are allowed to drive within the block and must share the space with pedestrians and adjust their speed accordingly. 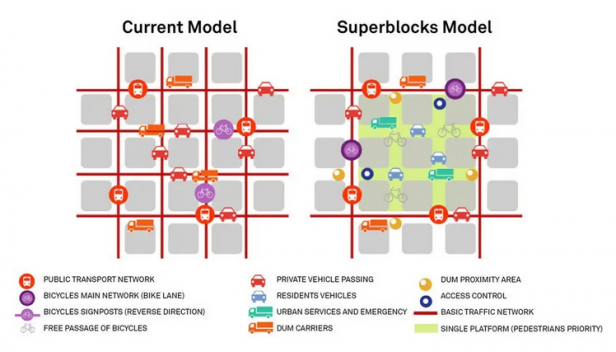 A lot of concrete – little green spaces:
Barcelona has become a tourist magnet in the last decades. Here, thousands of people enter the city every day alongside its own inhabitants (1.6 million), increase the density of cars and thus warm the city. Therewith, the densely built-up metropolis has an especially strong heat–island effect and is most of the times 3-8 degrees warmer than the surrounding areas.

With the transformation of the residential quarters into meanwhile five superblocks, Barcelona has given back approximately 5000 square meters of space to its pedestrians. Besides the creation of green areas, for example in the form of playgrounds and sports fields, cycle paths are also being developed. The redevelopment has also shown that trade benefits in the neighbourhoods where there are significantly more pedestrians and cyclists on the streets.

This urban transformation in Europe’s major cities shows an interesting trend, for which the appropriate infrastructure should also be available. If the car is to be dispensed with, people must have alternatives for moving around the city efficiently – the best conditions for the nationwide establishment of sustainable, needs-based and new forms of mobility. 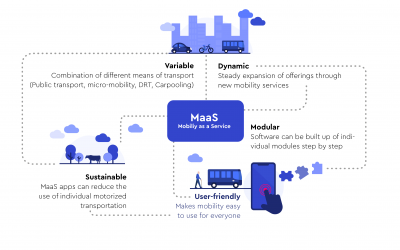